The Complete History of the Engagement Ring (part 1) 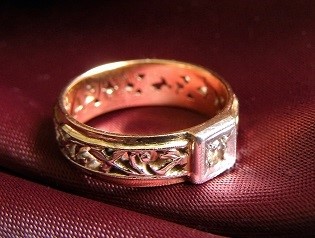 Have you ever wondered about when the first engagement ring was given? How did this wonderful tradition begin, why has it lasted generations, and what was the love story behind that very first diamond engagement ring?

There are many stories of the idea of when wearing a ring began, one of the oldest is born out of Greek mythology. As the old story is told, Prometheus ( A Greek god known for his intelligence and champion of humanity) defied the other gods and gave fire to humanity. Zeus (Father of the gods) was so enraged by Prometheus actions, he chained him to a rock on Caucasus (A region at the boarders of Europe and Asia) for eternity. There Prometheus remained to be fed upon by eagles for all time. As time passed Zeus’s anger subsided and he chose to pardon Prometheus. He released him under the condition that he wear upon his finger and iron ring in which was attached a small portion of the rock he had been chained to. With this action Zeus had kept his word, in effect keeping Prometheus bound to the rock. This is the story of the first ring with the insertion of a stone.

The earliest history of rings being utilized as a symbol of communicating ones love can be traced back to caveman days when braided grass was used to fashion bracelets and anklets to show a man’s attraction to a women.

The documented history of wedding rings starts in the Ancient Egyptian era 2800 BC were wedding rings made from weaved reeds or hemp were exchanged. They believed that the circle of these rings represented the joining of the divine and the couple in a never ending circle of love. As time progressed the Ancient Egyptian hemp rings gave way to iron rings, later utilizing gold or silver for their rings. Many Egyptians were buried with their rings worn on the third finger of their left hand. This tradition came from the belief that this finger contained a blood vessel that connected directly to the heart, (Vena Amoris: the Latin term for a blood vessel that leads to the heart). Ancient Egyptians also believed that if their rings ever broke, it would mean the beginning of very bad luck. It was also believed if they ever removed their bands, their love for each other would fly away, ending their relationship.

Look for more on the “Complete History of the Engagement Ring” (in part 2 of my series),
Roman and Greek empires.